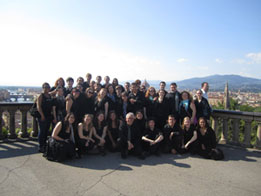 The LIU Post Chorus has built a strong reputation and has been recognized as a leading college/university chorus in the New York area. In recent seasons the LIU Post Chorus has performed at Carnegie Hall, Avery Fisher Hall and the Rose Theater in Lincoln Center, sharing the stage with the Cecilia Chorus of New York and Cantori New York as well as soloists and orchestra of the verismo opera company Teatro Grattacielo. In 2013, in partnership with the Cecilia Chorus of New York, with Orchestra, the LIU Post Chorus performed the historic New York premiere of the Mass in D by Dame Ethel Smyth at Carnegie Hall. In 2012, these two groups joined forces to perform Verdi's Requiem, also in Carnegie Hall, and in December 2015 they again shared the stage for Handel's Messiah at the Tilles Center. Additional performances have included the North American premiere of Pietro Mascagni's opera Il Piccolo Marat, and a rare presentation of Wolf-Ferrari's opera Il Gioelli della Madonna. The chorus's performances have won strong reviews on blogs and in the international press.

In 2014, the LIU Post Chorus toured Ireland giving well-received concerts in Dublin, Kilarney, and on the beautiful Cliffs of Moher. The chorus also toured Italy in 2011.

Since its founding, the LIU Post Chorus has consistently appeared in New York venues. The chorus has performed major choral works with many Long Island and New York orchestras, including the Brooklyn Philharmonic Orchestra, the Queens Symphony, the National Orchestra, the New York Virtuosi, and the Opera Orchestra of New York. The chorus has sung at Lincoln Center in Avery Fisher Hall and Alice Tully Hall, Carnegie Hall, the Brooklyn Academy of Music, Colden Auditorium, Tilles Center and the Kennedy Center in Washington, D.C.  Repertoire has included Verdi’s Requiem, Beethoven’s Mass in C, Fidelio, and Symphony No. 9, Dvorak’s Requiem, Mahler’s Symphony No. 2, Bach’s Christmas Oratorio, Stravinsky’s Symphony of Psalms, and Bernstein’s Chichester Psalms.

The chorus was led for over four decades by Alexander “Lex” Dashnaw and most recently by Dr. Mark Shapiro and Jason Thoms.