A Historic and Memorable Awards Ceremony 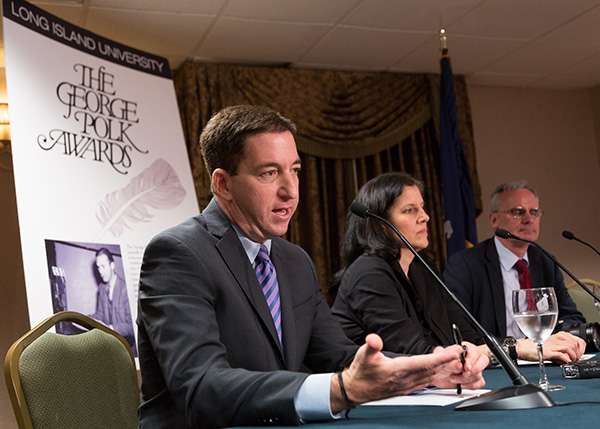 The 2013 George Polk Awards were presented at a luncheon at The Roosevelt Hotel in Manhattan on Friday, April 11, 2014. Among many important achievements in investigative reporting that were honored, four journalists—Glenn Greenwald, Laura Poitras, Ewen MacAskill, and Barton Gellman—received the George Polk Award for their work on stories revealing the extent of domestic and international surveillance by the National Security Agency, based on top-secret documents disclosed by former intelligence analyst Edward Snowden.

“In the tradition of George Polk, many of the journalists we have recognized did more than report news,” said John Darnton, curator of the awards. “They heightened public awareness with perceptive detection and dogged pursuit of stories that otherwise would not have seen the light of day. Repercussions of the NSA stories in particular will be with us for years to come.”

After much speculation about possible legal repercussions upon returning to the United States for the first time since the Snowdon stories broke, both Greenwald and Poitras made it through customs and to the event in time for a rousing ovation from their peers. Both dedicated the award to Edward Snowden for his courage and thanked the Polk Committee for giving them a good reason to "test the First Amendment" (as Greenwald noted to HuffPost Live) and return to the United States.

For a full transcript of their remarks, visit Democracy Now. An archive of media coverage is included below for more coverage of the historic event:

Journalists Who Broke News on the N.S.A. Surveillance Return to U.S., The New York Times, April 11, 2014

Glenn Greenwald Greeted by Media Scrum on His Return to the USA, New York Magazine, April 11, 2014

2 reporters who probed NSA surveillance back in US, The Associated Press, April 11, 2014

Glenn Greenwald: 'No Question' I'll Return To The US, The Huffington Post, February 19, 2014