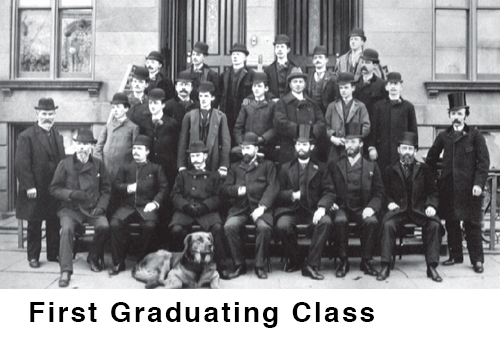 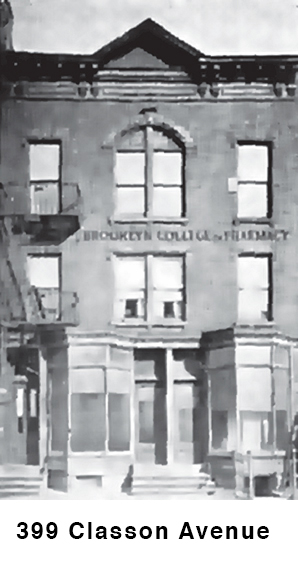 The Brooklyn College of Pharmacy was established in 1886 by the Kings County Pharmaceutical Society three years after the opening of “the great bridge.” Initially the College offered a “partial course of lectures” to the drug clerks of the city. Following a fund-raising campaign begun in 1889 to establish the College as a recognized institution to grant pharmacy degrees, the first formal course of study began on October 5, 1891. In 1892, the College graduated its first class. Students in this era attended lectures in a two-room apartment on the second floor of a Victorian building located at 399 Classon Avenue. Among the members of the first class was William D. Anderson, Ph.G., who became the third dean of the College. Due to growing enrollments the College moved to a larger space at 329 Franklin Avenue in 1895. 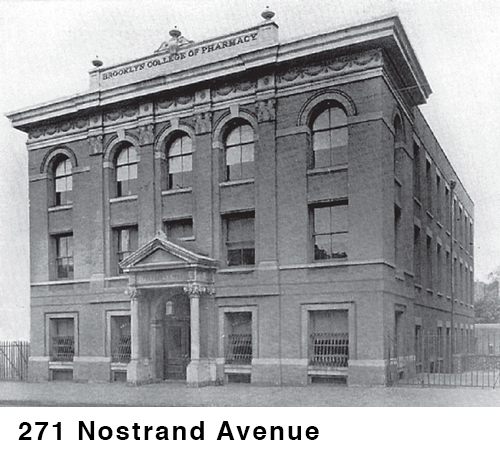 In 1903, the College moved to its first specially built home at 265-271 Nostrand Avenue. The three-story brick and stone building had been constructed by the Society to be “thoroughly equipped for the best work in pharmaceutical education.” The building served the college for 26 years. On September 14, 1922, a short circuit in the electrical system caused a fire that destroyed the first floor lecture room. The fire did not delay the start of fall classes the following Monday. 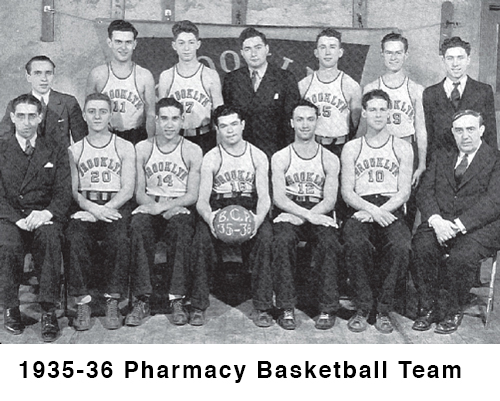 In 1929, the College affiliated with the recently established Long Island University but still retained its own board of trustees and independence. Long Island University was chartered by the state in 1926 with the mission to provide “effective and moderately-priced education” to people from “all walks of life.” From its beginning, admission to the University was based solely on merit and promise. In the same year, the College moved to its fourth home at 600 Lafayette Avenue. The five-story modified Collegiate Gothic laboratory and classroom building included two 250-seat lecture halls and a rooftop greenhouse for the growing of plants for demonstration and research. To date this building served the College for the longest period of time, 47 years.

The 600 Lafayette Avenue building included a top-floor gymnasium. The gymnasium was home to the College's basketball team that was a member of the Intercollegiate Pharmacy League that included schools/colleges such as Fordham, Columbia, Philadelphia, Rutgers and Temple. The gymnasium also was home court to the LIU Blackbirds under famous coach Clair Bee until the conversion of the Paramount Theater auditorium at LIU Brooklyn to an athletic facility in 1963. 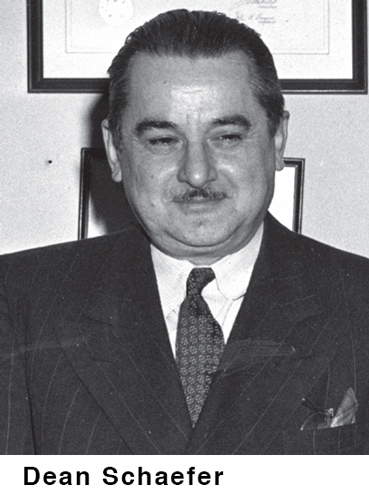 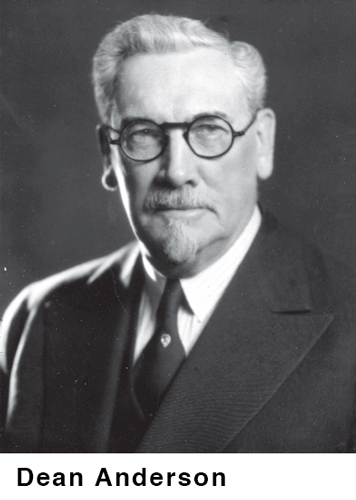 A Changing of the Guard

In 1937 Dean William D. Anderson retired and Dean Hugo H. Schaefer took over leadership of the College. Dean Anderson had served the college since 1902. Prior to Dean Anderson were Deans Robert G. Eccles (1891-1892) and Elias H. Bartley (1892- 1902). Dean Anderson presided over the openings of the first two permanent homes of the College and it’s initial affiliation with Long Island University. Dean Schaefer was also the long- time treasurer of the American Pharmaceutical Association (now the American Pharmacists Association) and is remembered as the namesake of one of its most prestigious honors, the Hugo H. Schaefer Award for outstanding voluntary contributions to the organization, the profession and society. 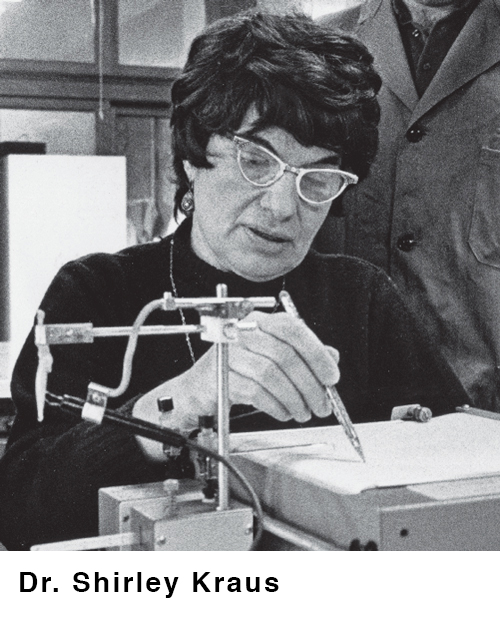 In 1950 the College appointed its first female faculty member, Dr. Shirley Kraus. She ultimately mentors a number of the College’s best known alumni including Dr. Louis Lemberger (Class of 1960). Dr. Lemberger served as one of the principles of the scientific team that developed the antidepressant drug fluoxetine (Prozac). 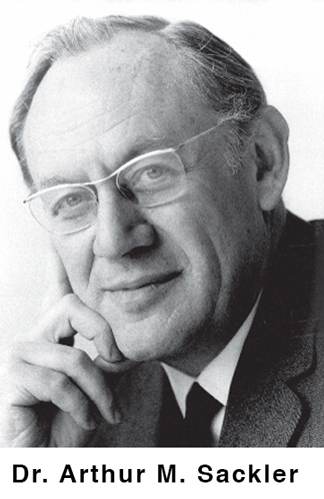 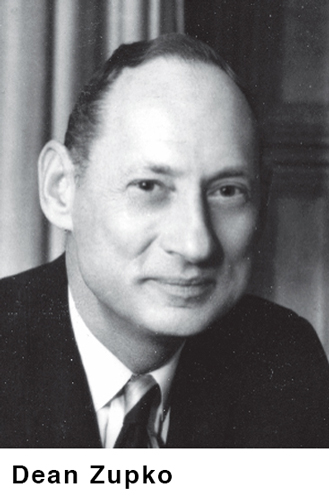 In 1956 Arthur G. Zupko, an internationally renowned researcher in pharmacology, became the fifth dean of the college. Arthur M. Sackler, research psychiatrist, entrepreneur, philanthropist and one of the country’s leading art collectors and patrons, founded the Laboratories for Therapeutic Research, a nonprofit basic research center, at the College in 1958 and served as its director until 1983.In 1959 the College pioneered in the field of pharmacy with a radioisotope laboratory. The laboratory was made possible through alumni contributions and a grant from the Atomic Energy Commission. A new graduate program leading to an M.S. as specialization in pharmacy administration, the first of its kind in the state, also was instituted in 1959. Beginning in the fall of 1960, the five- year B.S. in Pharmacy program was instituted, and in 1962, a hospital pharmacy administration internship program was introduced. Numerous other M.S. degree programs were introduced during the 1960s and early 1970s.

Another Move, A New Name 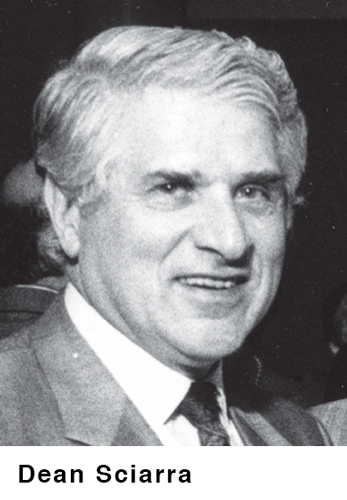 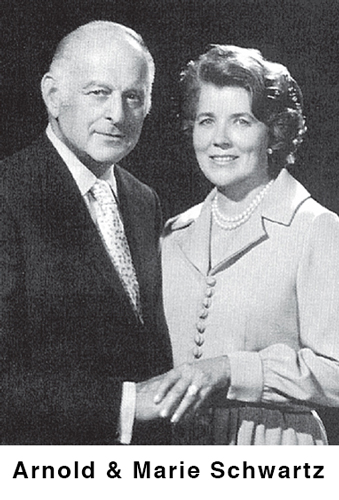 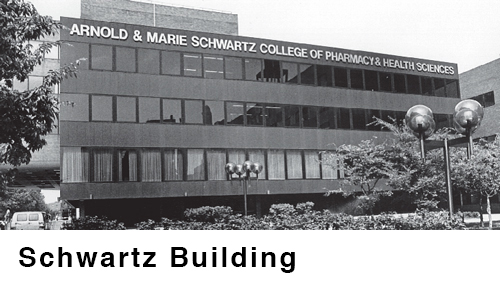 In 1976 construction was completed on a new complex for the College at Long Island University's Brooklyn Campus, a quarter mile from the building at 600 Lafayette. The new home for the College was made possible by the philanthropy of Arnold Schwartz and his wife, Marie Smith Schwartz. The Brooklyn College of Pharmacy became the Arnold & Marie Schwartz College of Pharmacy and Health Sciences. At the same time the College became a fully integrated unit of the University. The move was overseen by Dr. John J. Sciarra, who had become the College’s sixth dean. 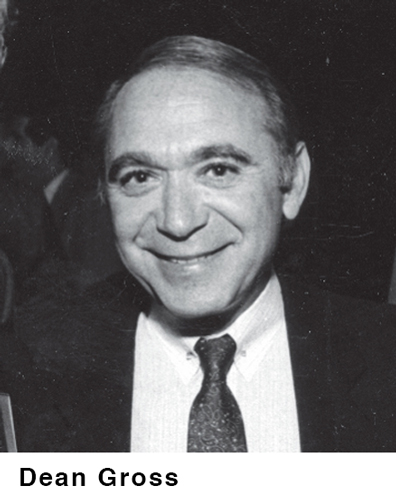 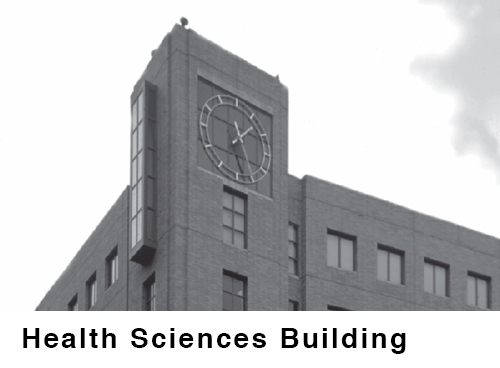 The Zeckendorf Health Sciences Center, completed in 1995, provides the College’s students with expanded lecture facilities, a state-of-the-art home for the International Drug Information Center and specialized laboratories for the Ph.D. program in Pharmaceutics (begun in 1993) as well as faculty research. In September 1994, the College accepted its first students into the postbaccalaureate Pharm.D. program. May 2002 saw the students in the College’s first entry-level Pharm.D. class (who began their professional studies in 1998) receive their Doctor of Pharmacy degrees. These initiatives were overseen by the College’s seventh dean, Dr. Stephen M. Gross, who succeeded Dean Sciarra in 1985. Campus facilities continued to grow as well with completion of the Steinberg Wellness Center (“WRAC”), Kumble Theater and the Pratt Building. 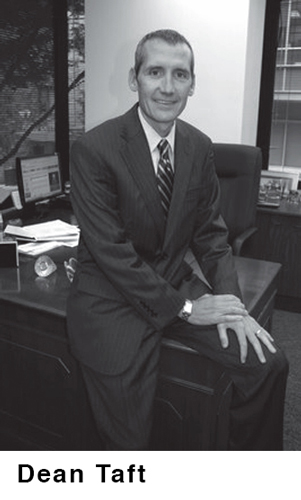 In 2008 Dr. David R. Taft became the eighth dean of the College. Under his stewardship facilities continued to grow and expand. Three new research institutes were established: The Lachman Institute for Pharmaceutical Analysis; the Joan B. and Samuel J. Williamson Institute for Pharmacometrics; and the Natoli Engineering Institute for Industrial Pharmacy Development and Research. These institutes, moving into newly constructed state-of-the-art space in 2014, are creating a center for pharmaceutical innovation. 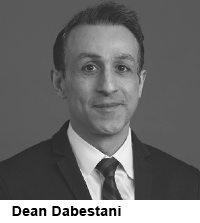 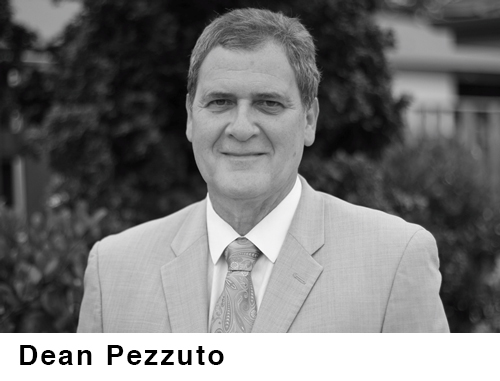 In 2011 the College celebrated its 125th anniversary. The ninth dean of the College, Dr. John M. Pezzuto, joined the College in August 2015. Under his leadership many new initiatives were launched, including the construction of a world class research facility: Arthur G. Zupko’s Systems Pharmacology and Pharmacogenomics laboratory.

In November 2020, the tenth Dean of the College, Dr. Arash Dabestani, assumed leadership of the College with a strong commitment to carry on the College's 134 year tradition and lead our student into the next chapter in the evolution of pharmacy.

As the College moves forward, we collectively look back with pride at our distinguished heritage and we eagerly continue to dedicate ourselves to excellence in the education of tomorrow’s pharmacists and pharmaceutical scientists.