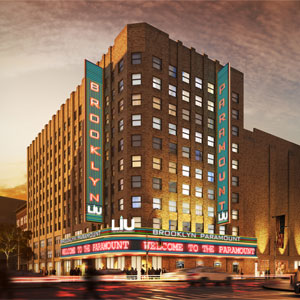 Q:  What is The Brooklyn Paramount Theatre?
A:  The Brooklyn Paramount Theatre (the Paramount), located at the corner of Flatbush and DeKalb Avenues in Brooklyn, operated from 1928-1962 as a live performance venue and was the first theater in the world designed to show talking movies. Performances at the Paramount included artists such as Frank Sinatra, Ella Fitzgerald, Miles Davis, Bing Crosby, Buddy Holly, and Chuck Berry. The Paramount introduced the borough to jazz and was the early home of Rock n’ Roll in the 1950’s.

Q:  What happened when the Paramount closed?
A:  After closing its doors in 1962, the building became part of the LIU Brooklyn campus and now serves as a multi-purpose space for students, staff, and guests. The building retains much of the theater's original decorative detail, including a Rococo style ceiling.

Q:  What is the plan to reopen the Paramount?
A:  The Paramount will undergo a 24-month renovation and rejuvenation that will restore the historic theater to its former glory and provide exciting new services to the community and entertainment industry. The resurrected Paramount, which will be known as the LIU Paramount Theatre, will have capacity for 3,500 guests and create endless opportunities for LIU students, faculty and members of the Brooklyn community to experience live performances, take classes, and learn in this historic space.

Q:  Who is leading this process?
A:  The restoration will be led by Paramount Events Center (PEC) and LIU Brooklyn. PEC is led by Barclays Center developer and majority owner Bruce Ratner and Barclays Center CEO Brett Yormark, and will work in conjunction with Onexim Sports & Entertainment USA on this project. Bruce Ratner’s development company, Forest City Ratner, is one of foremost developers, owners and operators of distinctive urban real estate in New York and has built its reputation on bringing lasting change to Downtown Brooklyn over the last 30 years. Recent Forest City Ratner development projects include Brooklyn Metrotech and the shopping mall at the intersection at Flatbush and Atlantic Avenues.

Q:  What is the project timeline?
A:  The actual construction of the building has not yet been officially announced.  However, the new LIU Brooklyn Paramount Theater is expected to open in 2022.

Q:  How much will the renovation cost and who is paying for it?
A:  This is an estimated $50 million dollar capital improvement project that will be completely funded by PEC.

Q: How will this affect the LIU Brooklyn community?
A:  The LIU Paramount will create endless opportunities for the LIU Brooklyn community. LIU students will be given the opportunity to gain hands-on industry experience across multiple disciplines, including arts management, media arts, performing arts, marketing, and more. As part of this new relationship between LIU Brooklyn and the Barclay’s Center, educational opportunities in professional sports, real estate, business administration, and finance will be created and expanded upon. In addition, the LIU Paramount will host private programs and offer free or discounted tickets to students to select events, and a portion of all ticket sales will be provided to support student scholarships.